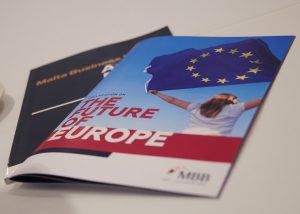 1 April – As the Conference on the Future of Europe enters its final stage, the European Commission published its 4th interim report in which two ideas from the MBB’s Business Declaration on the Future of Europe have been referenced. These include recommendations to (1) address skills shortages and (2) make EU decision-making more transparent, inclusive and efficient.

The challenges facing the labour market today are not new. The digital transformation of the workplace is outpacing educational institutions and the labour market across the EU is experiencing a skills shortage. In the short term, simpler procedures are required to attract third country nationals in the face of stiff competition for skills from other countries such as the United States, Canada and the United Kingdom. In the longer term, the EU must continue facilitating cooperation among Member States, and particularly between educational and VET providers as well as the private sector through relevant programmes, tools and sharing of best practice.

MBB welcomes that in the next EU multinational financial framework, the financial commitment towards social programmes (such as the ESF+) and mobility programs (such as Erasmus+) was strengthened. MBB looks forward to learn more about the new ALMA program announced in the 2021 State of the Union speech as it is a very promising development in this regard, particularly in its aim to provide work placements to recent graduates.

Labour market realities in the EU vary considerably due to different industrial relations systems that evolved nationally over many decades. EU legislation in this area must continue respecting the subsidiarity principle and steer away from one–size-fits-all solutions by allowing Member States, and where applicable social partners, to implement policies according to national practices.

On decision-making, MBB calls for a more transparent, inclusive and efficient process at all levels. Policy initiatives must be backed with evidence-based impact assessments and must fully respect the proportionality principle. Business cannot carry the burden of disproportionate, administratively burdensome, and one-size-fits-all measures. Specific realities such as the insularity of remote and island regions and states, should be acknowledged and reflected in legislative outcomes.

It is concerning that substantial amendments to European Commission proposals by the Council and the Parliament are still not subject to impact assessments except. This is a situation which is detrimental to all and must be rectified without delay. In this respect, for instance, the European Parliament should make more use of the European Parliament Research Service in providing such assessments on compromise amendments before they are subject for final deliberation by the appointed Parliamentary Committee.

The co-decision procedure is a crucial element of the functioning of the European Union, providing more fairness, transparency and made the EU more democratically relevant. However, often amendments are pushed for political reasons with little regard to their consequences in their subsequent implementation. The Council and the Parliament have a duty towards EU citizens in ensuring that their legislative processes do not detract from the quality of legislative proposals.

A plenary involving all nominated stakeholders will take place in April 2022 where the proposals will be consolidated and a final report will be delivered by Europe Day to the Presidents of the European Institutions: European Parliament President, Roberta Metsola; European Council President, Charles Michel; and European Commission President, Ursula Von der Leyen.

The European Commission’s interim report can be found here (Report Platform – February 2022). Reference to MBB’s recommendations can be found on pages 50 and 85.

Posted on 1st April 2022 in Media
Share this article: