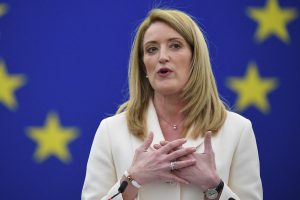 18 January – The Malta Business Bureau congratulates Dr. Roberta Metsola on being elected President of the European Parliament, the highest democratic institution in the European Union. With her election, MEP Metsola is making history as the first Maltese citizen to take up such a prestigious position. She is also breaking barriers by achieving this despite being from the smallest EU Member State, and also as the first female President in 20 years.

MBB President, Alison Mizzi congratulated MEP Metsola on her election and augured her a successful mandate. “Roberta can be proud for obtaining the confidence of a great majority of MEPs from so many diverse countries and political backgrounds. The work she undertook in the European Parliament shows her abilities to negotiate while fighting hard for what she believes in. For this reason, she deserves the recognition received with today’s vote,” stated Ms. Mizzi.

“MEP Metsola is also taking the leadership of the European Parliament in very challenging times. Globally we are still fighting our way through a pandemic, and Europe is still finding its way to economic recovery. At the same time the EU is paving the way for the green and digital transitions. Apart from the policy and legislative cycles, the EU itself is in the process of transforming itself to remain relevant for the citizens of Europe. Roberta has the privilege and the responsibility of being in the centre of this process and I am sure she will stand up to the occasion,” concluded Ms. Mizzi.

MBB CEO, Joe Tanti also commended MEP Roberta Metsola on her election, saying that, “Being the only Maltese private sector organisation with an EU representation in Brussels, the MBB has continuously liaised with MEP Metsola and her office over the past years. Roberta is a humble and visionary leader who is always well-prepared for every point of discussion and has actively cooperated with our initiatives. For this, we are very grateful. I have no doubt that her good qualities will allow Roberta to do an excellent job as European Parliament President, which will meet and exceed the expectations at European level.”

Posted on 18th January 2022 in Media
Share this article: