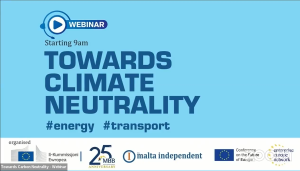 3 December – On Thursday, the Malta Business Bureau and the European Commission Representation in Malta organised a webinar on the European Union’s climate strategy and the Fit For 55 package, in collaboration with The Malta Independent and the Enterprise Europe Network.

Released in July 2021, the Fit For 55 package is the first set of legislative proposals seeking to move the EU towards the goal of climate neutrality by 2050, as outlined in the EU Green Deal. The package covers issues ranging from increasing energy efficiency and renewable energy, to reducing the emissions generated by the building and transport sectors, including maritime and aviation.

Amongst the several proposals put forward, the European Commission aims to increase energy efficiency obligations on member states as well as the share of renewable energy in their final energy consumption, remove tax exemptions of maritime and aviation fuel, promote the use of sustainable fuels, and increase the supply of adequate charging infrastructure for electric vehicles.

Opening the webinar, Head of the European Commission Representation in Malta, Dr Elena Grech asserted the importance of immediate action, “If we do not take climate action now, we are going to miss our chance. The ambition is to achieve carbon neutrality by 2050. The European Commission is proposing to achieve this through impactful legislation and practical assistance to Member States through its Recovery and Resilience Funds.”

MBB CEO, Joe Tanti welcomed the increased climate ambition, considering it necessary to safeguard long term prosperity, growth, and job creation. Nonetheless, he argued that, “Policy measures should always be designed keeping in mind the economic context they are operating in. Businesses are just starting to recover from the worst economic downturn since the 2008 financial crisis. It is critical that new or revised policy measures do not hamper business competitiveness or introduce disproportionate financial costs that will invariably be felt by companies and impact consumers.”

In her statement, Hon. Miriam Dalli, Minister responsible for Energy, Enterprise and Sustainable Development, argued that the energy sector across Europe is currently feeling post-pandemic effects. Minister Dalli added that while some questioned the EU Green Deal’s validity during the pandemic, she believes it will in fact underpin Europe’s post-recovery effort.

Moderated by Media Consultant Rachel Attard, the webinar featured a high-level panel discussion between Diederik Samsom (Head of Cabinet of European Commission Executive Vice President Frans Timmermans), Ing. Patrick Spiteri Staines (Chairperson of The Malta Chamber’s Energy Committee) and Prof. Simone Borg (Head of the Environmental & Resources Law Department at the University of Malta). The discussion centered around the potential implications of the Fit For 55 Package on Maltese businesses. Recognising Malta’s geographic limitations, the panellists argued that more research and investment should be dedicated towards applying innovative technologies which generate greener energy and reduce atmospheric carbon emissions. This would help push Malta beyond its minimum targets, especially on renewable energies.

The drive towards a greener European economy will also represent several opportunities for businesses to delve into new areas and focus on the sustainability and efficiency of their operations, cutting down waste in the process. Finally, the panel stressed the importance of providing suitable financial support to those businesses and communities which will be hardest hit by stricter environmental legislation.

Other interventions were made by Kevin Borg, CEO of the Malta Maritime Forum, Dr Nadia Giordimaina, General Manager International Affairs of Air Malta, and Perit David Xuereb, former President of the Malta Chamber.

These Commission proposals are just the first step towards enacting the new and revised set of EU legislation. Agreement on common texts must now be sought between the Council of Ministers and the European Parliament.

Posted on 3rd December 2021 in Media
Share this article: