Ambitious EU climate targets not the issue, but who will pay the price? – MBB President 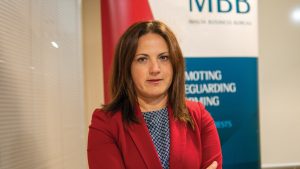 Sustainability is high on the EU agenda with climate change objectives such as 55% carbon reduction by 2030 and Europe to become carbon neutral by 2050. But is this realistic within the context of Malta? Dayna Camilleri Clarke spoke to Alison Mizzi, president of the Malta Business Bureau to find out more.

With a strong background in EU policy and consultancy, Mizzi took to the helm of the MBB in June, the only Maltese organisation with a permanent presence in Brussels. “It’s our core mission to strengthen the voice of Maltese business at EU level. We have an office in Brussels to be in the middle of it all while shaping EU policy and enacting legislative frameworks. It’s no secret that forming EU policy and legislation can be very complex, and every topic discussed in Brussels touches upon member states differently. We follow proceedings at the EU level, together with our business network within the context of other pan-European business lobby groups such as BusinessEurope, EUROCHAMBRES, and HOTREC, to identify potential implications of EU pipeline legislation and bring them to the attention of the local Maltese business community at an early stage via the Malta Chamber and MHRA, which are the MBB’s parent organisations” explained Mizzi.

“It’s certainly a busy year for us, which is making my journey so far very interesting. This year the organisation is celebrating its 25th anniversary. Thanks to the leadership of my predecessors, it has grown into a strong and reputable entity that I aim to build upon. This is also the year of the Conference on the Future of Europe and a delicate period as businesses seek to build and make up for the past months due to the crisis.”

It’s widely known environmental sustainability is high on the EU agenda with climate change objectives such as 55% carbon reduction by 2030 and for Europe to become carbon neutral by 2050. But is this realistic within the context of Malta? Mizzi replied, “These targets are legally binding, and they represent the EU’s commitment on an international level. From our perspective, ambitious targets are not the problem but rather the question of how these will be met and at what cost to our economy. One cannot disconnect our environmental obligations from the international economy. What I am saying is the climate issues cannot be fought by the EU alone. Ultimately our companies compete on a global scale. Therefore, we must ensure we meet the objectives by shifting to more green energy production and transportation, efficient buildings and ecological agricultural practices.

We know these sectors are the biggest emitters of greenhouses gases. Progress has to be achieved by adopting innovation and bringing new technology to market, and without exerting disproportional financial and administrative burdens on companies. There should rather be more effort to stimulate investment and create new green jobs.

“From a local perspective, we bring forward the island dimension at every opportunity. Small island states such as Malta, which are located on the periphery of the EU have different characteristics from larger countries on mainland Europe. There is a lot we can and must do to become more sustainable but must also insist that one size fits all policies cannot apply to our situation.”

Nonetheless, EU funding instruments such as the Cohesion policy and the Recovery and Resilience Fund, among other EU programmes, can help to create a good economic environment that would pave the way to greening the economy and in turn help all of us achieve the EU targets.”

What does the future hold for the EU, and particularly with Malta? Mizzi is quick to reply, “It’s a living project, and unless it continues evolving, it will stagnate and risks becoming irrelevant to the needs of the economy and society. Earlier this year the EU launched the ‘Conference of the Future of Europe’, and this process is a crucial one. This initiative comes at an important time in history and this shows us how the EU has developed significantly since the aftermath of the financial crisis. It gives an opportunity for citizens to voice their views and concerns about the direction that the EU plans to take. Brussels is often criticised for being too removed and in too much of a bubble to know our daily struggles here in Malta, and frankly everywhere else.

Therefore, this is our opportunity to speak up. We consult businesses continuously, and most recently we organised a special consultation specifically on this topic. We discussed businesses’ views on the European economy, sustainability, skills, and on how the EU could do better regulation more broadly. We heard businesses’ expectations on the EU’s role beyond the crisis and how it can pave the way for post-pandemic recovery.” The MBB will be launching a high-level political declaration on the 28th October, on which occasion it will also be commemorating its 25th Anniversary. This will be our contribution to the Conference on the Future of Europe.”

Asked about the impact of FATF grey listing on Malta, Ms. Mizzi acknowledges that this is expected to have negative repercussions, including reputational damage with direct impact on foreign investment and an increase in the cost of compliance related to the Anti Money Laundering (AML) regulatory framework.

“The costs of grey-listing will be felt by the whole economy for as long as we uphold this status, and possibly beyond. The business community would like to see political maturity and cooperation with the respective parties, with partisan interests becoming secondary. We need to ensure that FATF recommendations are adopted and applied as soon as possible to regain the former status,” explained Mizzi.

Posted on 21st October 2021 in Media
Share this article: